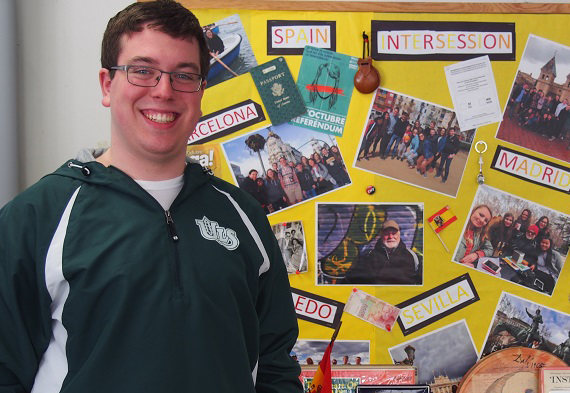 One of the highlights of our annual Global Leaders Conference is announcing the recipient of our Xperitas Alumni Scholarship. We award one $2,000 scholarship each year to a student who traveled as a high school junior or senior on an Xperitas Language Immersion Program. This January, we were pleased to announce that we have selected Daniel Brand, of University Lake School in Hartland, Wisconsin, as the winner of the 2019 Xperitas Alumni Scholarship.

Daniel was nominated by Ann Mocchi, who has been teaching high school Spanish at University Lake School for 20 years. This is what she had to say about Daniel, whom she has taught for the past three years:

“With each passing year, his abilities and interest in the language have cracked wide open into a vivacious love of Spanish and its many cultures. At the end of his sophomore year, when Daniel told me he would be saving his bussing tips all summer long to be able to afford our Xperitas trip to Spain the following year, I was delighted! True to his Boy Scout and student government standards, not only did he achieve his goal of paying for half of the trip with his own earnings, but he ended up winning our unofficial Most Valuable Traveler award. Without a doubt, in my 25 years of teaching Spanish, I've never had a student who has earned such a high yield on a travel trip abroad. He lifted up our group with his enthusiasm, modeled strong scholarship and a growth mindset, and exemplified what it means to live the language.”

We stopped by University Lake School earlier in March to visit with Ann, and we finally got to meet Daniel! Daniel is planning on pursuing Engineering in college and continuing his Spanish studies. He is still waiting to hear back on his college applications. He wants to return to Spain – and for a good reason:

“Yesterday, during a college interview, I was asked what I would change about my high school career. Without hesitating, I said I would have pushed myself more in Spanish earlier on. In Spain I met Abuelo, who didn't speak a word of English. I complimented him on the mural in his living room. He pointed to himself and said, “Yo.” Turns out, all of the museum-like paintings in the house were his life's work. But I didn't know enough Spanish to hear why he painted them. I promised myself that, one day, I would go back to Sevilla to hear Abuelo's story about who was riding the horse in that painting in his living room, and where he was going.”

Daniel’s dedication to preparing himself for the trip, both financially and academically, impressed our selection committee. But perhaps, more than anything else, we were fascinated by his unbridled enthusiasm, fearlessness and curiosity. Daniel had never left the United States prior to his Xperitas program, and the oldest building he had ever seen before was a church from the 1800s. There is little doubt in our minds that Daniel will make a return trip to Spain to talk to hear Abuelo’s full story about his life’s work. We know that in the meantime, he will put our scholarship to good use, and we would like to once again thank him for his effort and dedication to the values that Xperitas holds dear.

Learn more about our Scholarship programs!

Let us assist in planning your next immersion experience and help make it accessible to all of your students! We have many destination options for Language Immersion programs. Contact us today!